How to Remodel a Total Home

It didn’t happen suddenly over a cup of coffee or while reading the newspaper. Over a period of time, our clients had come to the conclusion that their existing home no longer fit their needs. It was time to make a hard decision, one that would involve thousands of dollars, should they stay or go? For over a year, they had gone through the normal and frustrating process of looking for a home that would accommodate their vision. After inspecting a variety of homes and the options they presented, our clients came to the conclusion that they would remodel their existing home. Initial factors influencing the decision were the home’s prime location and its proximity to their places of employment. Pushing the decision over-the-top was the unique and irreplaceable topography of their heavily wooded rear yard, which contained a crystal clear stream flowing through a rocky ravine.

The Problems and Challenges

This 1951 traditional two story, six room home had been remodeled three times by previous owners in its 57-year life, creating a two story, seven room house with a hodgepodge of rooms that were lacking in both the functionality and amenities desired by our client. A detached garage, plastic shutters, rusted chimney cap, a deteriorating first level sun room, a den that had been tacked onto the rear of the house, a massive cracked concrete driveway and several different types of siding and brick veneer gave the exterior of this home a muddled look. Adding to the problems were an antiquated heating and air system, original windows and a deficient electrical infrastructure. 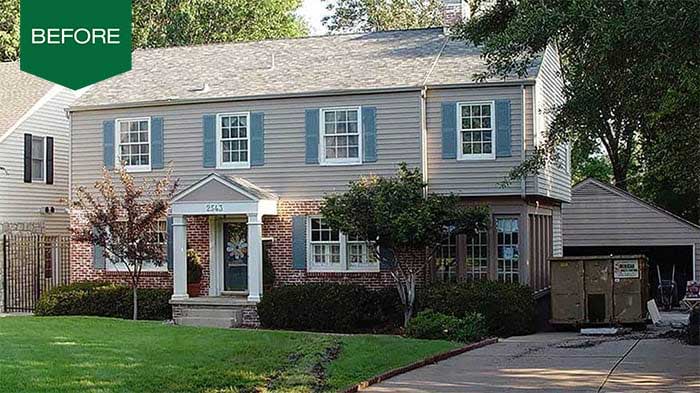 Deteriorating vinyl siding, molded plastic shutters and single pane glass windows were all targets for replacement on this whole home remodel. Rotting Masonite siding and a broken wooden overhead garage door were removed and replaced on the free standing garage.

The five-year old kitchen was cute and rustic in appearance. It was, however, an extremely cramped space that didn’t satisfy either the owners’ basic cooking and/or broader entertainment requirements. It needed additional storage and counter space, improved functionality, defined workspaces and a sizable eating area.

The original traffic pattern was less than entertainment friendly. Upon entering the house, access to the rear entertainment rooms and or the rear yard required that you walk through the dining room and kitchen to get to the den and family room after which you could access the rear yard. In addition, once in the living room, you were totally isolated from the balance of the home as you could not enter the family room without returning to the entry hall and following the same route through the dining room to the den. The cramped entry foyer, that ended at a blank wall, consisted of two small spaces and a non-functional one-foot-deep guest closet. Adding to the unappealing appearance of the entry hall was an inappropriate wrought iron railing. It was someone’s idea of an improvement that had been installed replacing the original first to second level stairway’s wooden railing.

In order to improve both the overall appearance of the home and its energy efficiency, all windows and the entry door were replaced. The existing vinyl siding, plastic shutters and sections of the original underlying and deteriorated wood siding were removed. New high end period specific replica siding and custom Western Cedar solid wood shutters were installed. The rusted galvanized chimney cap was replaced with a custom fabricated copper replica. The existing concrete driveway and walkway were removed and replaced with a new walkway and auto court. Brick pavers were used to outline the auto court and entryway. They were combined with broom-scored and salt finished concrete surfaces to add visual interest. A new concrete curb was installed at the interface of the front lawn and the brick paver lined drainage ditch. Free air space over the driveway provided needed room for expansion and reconfiguration of the entire second level master suite. HB&G composite structural columns support the new exercise room. The free standing garage, complete with new siding and an insulated metal overhead door has been attached to the house through the design and construction of an addition to the rear of the home.

To add to the feeling of spaciousness in the entry foyer both the wall dividing the entry foyer into two small areas and the guest closet were removed and the plumbing within the dividing wall relocated. The rear wall of the living room was opened up to allow traffic to move from the living room into a new family room that was added to the rear of the house. The wrought iron railing was replaced with a job site fabricated replica of the second level railing, recreating what was in our opinion, originally in place. The dead end hallway was opened up by removing both the rear wall and the existing powder room that was installed behind the same. As a result of these modifications, the entry foyer and hallway provided direct access to the new family and rear patio thereby eliminating guest traffic through the dining room and former kitchen.

The roof and walls of the existing den were removed, leaving only the floor and foundation. Selected sections of the existing deck and concrete patio were removed. Scattered sections of brick veneer and the remaining vinyl siding were then stripped from the rear of the home. The kitchen appliances, cabinets and wall structures were removed and the powder room exposed to its bare framing. A new structure was added to the remnants of the original den and a truss built roof installed to combine both the new and old spaces into one super kitchen. A wall of fixed and operable doors were installed in the exterior wall of the family room to allow a panoramic view of the extensive back yard. The door to the dining room was relocated, a new kitchen/dining room “access hallway” created and both a new pantry and powder room constructed in the area previously occupied by the kitchen. A portion of the original powder room was converted into a new functional guest closet with the balance of the former powder room’s space being allocated for the completion of the new center hallway. 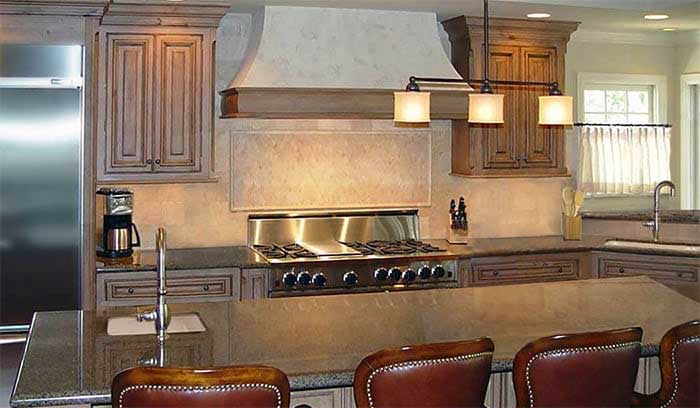 A complete new kitchen was designed and installed. Clear Alder Cabinets with Desert Sand Finish, buttery yellow walls and carefully chosen accessories give this kitchen old world flavoring. In the middle of the room a multifunctional center island serves as the command center for the kitchen. Commercial appliances in the cooking zone are directly opposite the vegetable sink, icemaker and drawers for small appliances and cookware. A Venetian Plaster Finish on the hood and a painted Suede finish on the ceiling add visual interest to the well-lit space.

An active social calendar and a penchant for outdoor entertaining gave the Owners a reason to improve this less than impressive exterior. Removing the tacked on family room addition, a side planting area, a portion of the wood deck and a small section of lawn made room for a new kitchen and family room. Removing the unusual combination of wood, vinyl and composite sidings created the opportunity for a uniform rear home appearance. 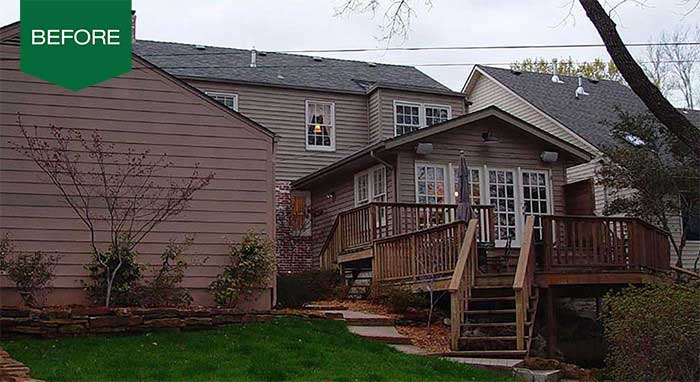 The deteriorating redwood deck, the poorly constructed family room addition, the rear windows and the siding on both the home and garage were removed during the demolition phase of the project. This provided a clean slate for a new addition that would tie the free standing garage into the home.

This imposing addition was scaled to hold its own as it integrated the former freestanding garage into the house. The combination new kitchen and family room addition creates a unique entertainment venue on both the inside and out. A gable roof with matching trim keeps the addition in step with the rest of the home. A row of fixed doors provides a view of the rear yard. Enhancing the addition are a modified deck, a stained and scored patio and barbecue, providing the Owners with the party perfect addition they requested. 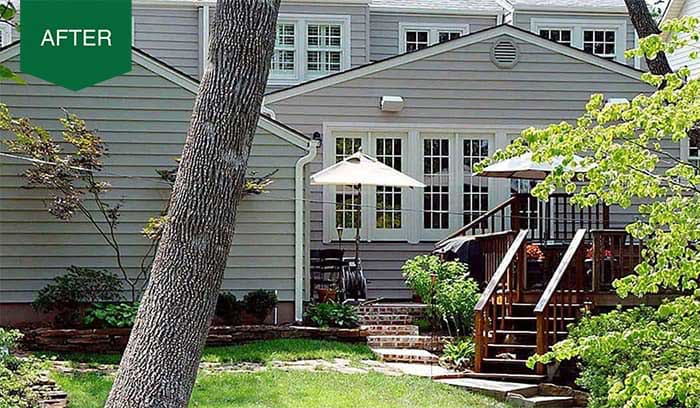 This creative and architecturally pleasing addition integrated the former free standing garage into the house. The new space allowed us to create a new kitchen complete with walk in pantry and a new powder room and family room. It also provided direct access to the living room dramatically improving traffic flow within the home. The bank of fixed Rogue Valley doors in the family room look out over the 300ft deep rear yard and the rock lined stream that runs through it.

The existing sun room, complete with sloped concrete floor and ceiling, had been created by enclosing an original screened porch with a set of fixed wooden doors. The concrete floor and ceilings were leveled and new large format porcelain tile installed. New fixed doors with exterior cladding and thermal pane glass inserts were purchased to replace the rotted existing units. Structural modifications were then made to the walls to allow installation of the new second level exercise room and drive through. By adding the exercise room to the side of the existing second level the overall appearance and stature of the home was dramatically improved by its extended length. Structural steel columns are hidden in the decorative fluted columns to provide the support necessary for the drive through.

A second level exercise room was added providing more living space for the master bedroom suite and a spectacular new face. Architectural elements including new decorative columns and real wood shutters add visual interest to the curbside view. The set back room addition over the brick lined auto court takes advantage of available air space and adds depth to the former flat front elevation. The siding, originally a patchwork of materials, is unified by a new historical correct grey siding. The white trim draws attention to the handsome new divided windows and front doorway. On the interior existing closets were removed and access from the master bedroom to the bathroom moved ninety degrees to a new hallway. His and her closets were incorporated into the expanded space of the bedroom. A box bay window was added to the exterior wall of the master, matching an existing box bay window in the adjoining guest bedroom, providing architectural symmetry to the rear of the home. A new hallway was constructed providing access to the new exercise room, and master bathroom. The existing shower was replaced by a new shower complete with frameless shower surround and new tile installed on the bathroom floor. New linen cabinets and windows were installed in the second level hallway.

A new shower, complete with frameless glass shower door and surround was added to the bathroom. The existing cabinets were glazed and the floor leveled. New large format Travertine tile was used to cover both the bathroom floor and the walls of the shower. New Windsor windows were installed and outfitted with custom wood Plantation Shutters from Battle Creek Shutters. Decorative mirrors and recessed lights were added to complete the bathroom upgrade.

“From the early planning stage through final execution and completion, you, your employees and subcontractors truly transformed our vague vision into a beautiful and functional home.” – Gerry and Betsy 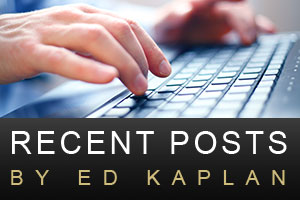