How to Remodel a Kitchen & Master Bath

A five-foot Galley Sink centered in an Alaska White Granite Countertop is serviced by two Delta faucets providing the heartbeat of this unique prep and serving center. Custom full overlay cabinets by Broken Arrow Woodworks provide a wealth of storage.

Our client’s home was surrounded by a hard to replace collection of mature trees. It was located in a quiet neighborhood that was known for its interesting collection of architectural styles. It had a back yard pool that was perfect for the empty nesters to have family gatherings.

They had owned the house for a number of years, and had rented it out during the time frame that the husband worked as a consultant abroad. Upon returning to the United States they wanted to have a home that incorporated many of the features that they learned to enjoy during their life in Europe. Initially they looked at newly constructed homes which inevitably had smaller lots, few trees and were not as conveniently located to shopping and family. After several frustrating months of searching our clients elected to stay in their location and to transform it into the home that they were looking for. They interviewed several design build firms, but remained apprehensive about undertaking a total first level remodel until they saw a remodel that we had completed in their neighborhood. Speaking with the Owners they became excited about taking on the challenge and subsequently contracted with us for a total first level design build project.

The Problems and Challenges

The dated existing kitchen was designed in a standard L shaped configuration with a bay window that accommodated the kitchen table. The dropped ceiling disguised the fact the true frame height of the kitchen ceiling was ten feet. It consisted of an eight-foot tall wooden frame that was lighted by fluorescent bulbs concealed behind egg crate style plastic lenses. The twenty-five year-old appliances were at the end of their life. Adding to the dated appearance were laminate counter tops, poorly designed storage and seven-foot tall cabinets that had yellowed with age. The limited floor space of the kitchen placed a damper on the gourmet cooking skills of the wife. The kitchen was also isolated from the adjoining family room by a cased opening restricting social interchange between these areas during family gatherings.

A dropped ceiling complete with plastic grids hovered over this 1980’s kitchen. Oak cabinets with arched top doors, that had yellowed with age, were tucked under the plywood covered soffit. Laminate countertops provided the foundation for a surface mounted sink, while 4” x 4” ceramic tile covered the backsplash.

It’s true that contemporary homes are shrinking. But that doesn’t mean a bathroom must be cramped, institutional or unwelcoming. Rather than zoning the bath space into separate areas for bathing and grooming, open it up with clear glass, single-level design and abundant light. It’s a principle that European designers have mastered beautifully. It’s also a way to ensure that small bathrooms feel as spacious as possible. 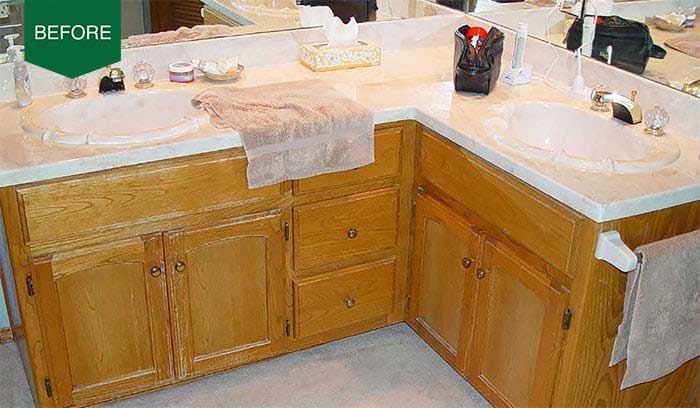 A vanity with his and hers cultured marble tops were crammed into the corner of this master bathroom in this south Tulsa home. The yellowed peeling finish on the ash cabinets coupled with polished brass faucets and an impractical floor covering of carpet placed an explanation point on the need for an update.

The first level flooring was made up of a combination of small format ceramic tile, carpeting and hardwood that separated and in a sense defined areas of the house, thereby minimizing the feeling of continuity that we look for in today’s homes. The powder room had limited cabinet space, a cultured marble top with integrally molded bowl, swag lighting and a toilet whose color had been carefully coordinated with the simulated veining in the artificial marble counter top.

The master bathroom was divided into small cubicles with an irregularly configured high vaulted ceiling that only served to accentuate the uncomfortable feeling of the bathroom. A large inoperative cultured marble whirlpool dominated the space overshadowing the three by three shower which was complete with polished brass plumbing fixtures. Two poorly designed closets and a small L shaped double vanity, with inadequate counter space, completed the bathroom challenge. 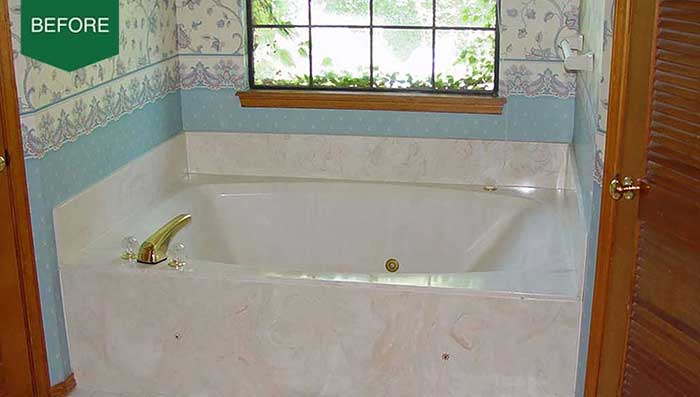 A mammoth cultured marble tub for two complete with a polished brass tub filler were the focal points as you entered this master bathroom. Fussy, outdated wallpaper, an aluminum window, carpeted floors and an abundance of louvered doors created a maze of dated visual effects.

This vastly improved super kitchen is now also chocked full of amenities. A sophisticated LED lighting system incorporating task, general and accent lighting was designed and installed. Complementing the convenient built in storage, are Alaska White granite countertops, a dual fuel commercial range complete with steam oven, a stainless steel exhaust hood with remote blower, a drawer microwave, six-foot Galley Sink with twin faucets, a pot filler over the range and both wine and column refrigerators. The cabinets, which are outfitted with transitional style doors, are organized for specific placement of kitchen items, such as spices, small appliances, cooking utensils and dividers for cookie sheets and serving trays. Two different cabinet finishes were used to complement the new hardwood floors. A new wall of thermally efficient exterior-doors provides a view of the back yard while allowing direct access to the pool. Constructed as a visible bridge between the indoors and outdoors they allow these spaces to be integrated with each other, thereby creating the desired central hub for family activities. 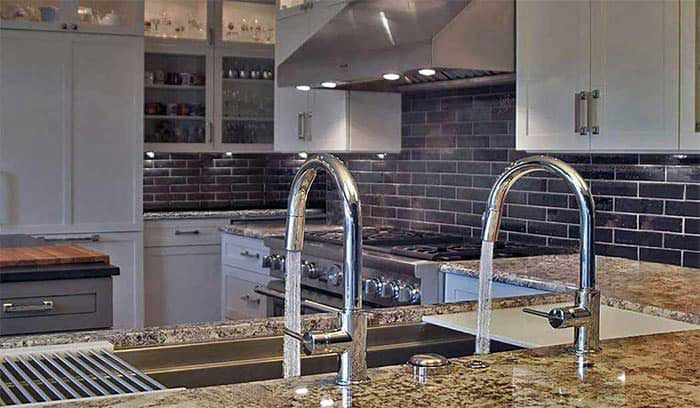 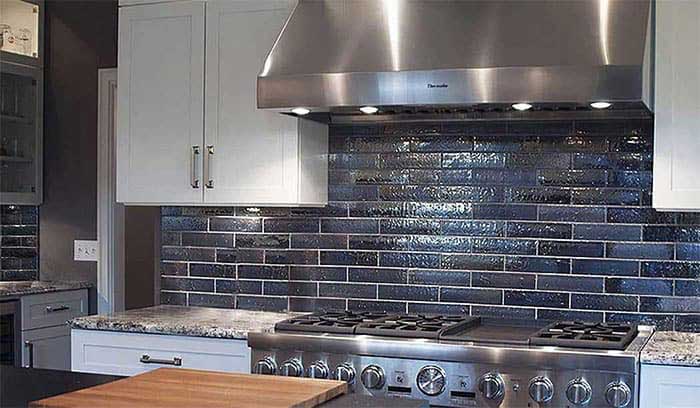 A Thermador exhaust hood & range, complete with steam oven are focal points in this kitchen. They are enhanced by the Kyoto glazed porcelain subway tile.

All existing flooring was removed and 2-1/4” oak floors installed to unitize the first level. A new front entry was added with custom glass doors and sidelights. Powder room cabinets with a faux finish including a display cabinet that accommodated a collection of the Owner’s Memorabilia were added in the powder room. A granite countertop, custom light fixtures, an unusual vessels sink and custom wallpaper complete the powder room’s transformation. 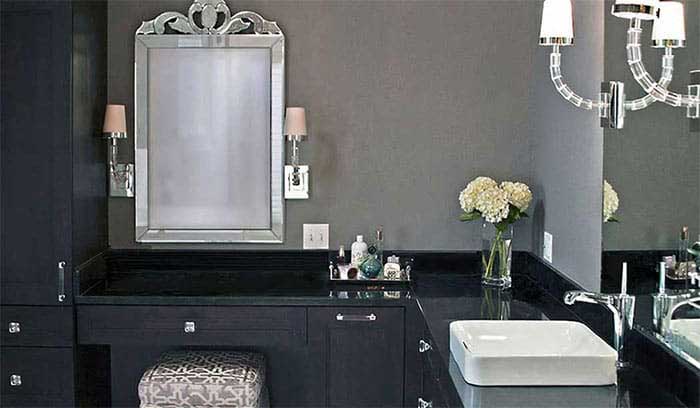 The layout of the master bath was totally reconfigured thereby enabling, both the husband and wife to have separate vanities. Brazilian Mahogany (Sapele) cabinets were designed and custom manufactured for this bathroom. Etched glass mirrors and custom wall sconces add both decorative and functional features to the space. A Kohler surface mounted vessel lavatory provides both clean-up-space and a cosmetic center for the wife.

Like the kitchen, the homeowners described their needs for a dream master bathroom. Since the exterior walls could not be moved we had to design the new bathroom within the existing footprint of the master suite. To incorporate all of the desired features in the bathroom which included a large master shower, free standing air tub, his and her vanities as well as his and her master closets, we had to gain space.

This Bain Ultra air tub is filled with a Kohler floor mounted tub filler. Characterized by its many programable luxury features the user is able to activate stimulating air jets, Chromo-Therapy lighting and or Vibra Acoustic treatments all while relaxing in the tub. Release your imagination and focus on how you would like to either start or end your day in this master bathroom air tub.

Since we could not expand the bathroom outside of the exterior walls we gained the needed space by moving the wall separating the bathroom from the bedroom two feet into unused space in the bedroom. We then relocated all of the plumbing fixtures and reframed the bathroom floor space for much needed functionality. 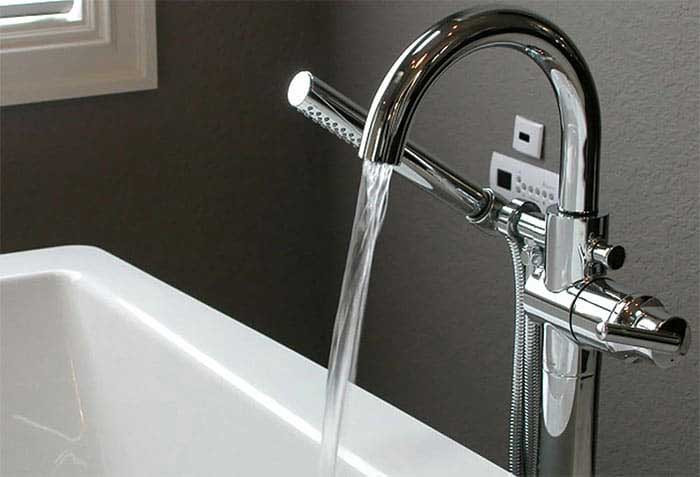 A high-volume Kohler Tub Filler with polished chrome finish and personal shower are used to fill this Bain Ultra air tub. A wall mounted Bain Ultra infrared activated programable controller can be used to activate a broad spectrum of therapeutic experiences while soaking in the luxury of this master bathroom tub.

Custom cabinets with transitional doors were fabricated from bookend matched Brazilian Mahogany. Electrical floor heating provides warmth to the bathroom and shower floors as well as the shower seat. Heated towels are wrapped around the Owner’s when they climb out of the free standing air tub that is outfitted with Vibra Acoustics and Chroma-therapy Lighting. 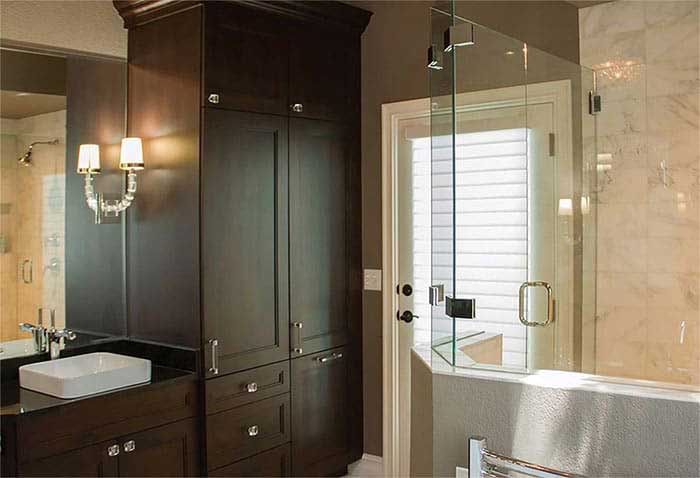 A Brazilian Mahogany linen cabinet provides storage space for towels and linens in this master bathroom. An exterior  door provides direct access to the backyard patio and pool. The master shower walls are covered with Carrara marble  subway tile. The outside walls are enclosed with a combination of a frameless glass shower surround and Carrara  marble. The absolute black granite countertop supports a Kohler vessel sink on his side of this high-end bathroom.

“As the job progressed there were no real surprises due to Ed’s meticulous planning, precise measurements, and ability to foresee problems. His problem solving skills are excellent.” Houzz Pro Spotlight: How to Update
Your Home for Today’s Lifestyles

Lifestyles have changed over the last few decades, but homes haven’t always followed suit. If you’re a cook, you probably yearn to be part of the party action. After a long day , you might want to relax with a long shower or bath… Designed with Outdoor
Entertaining in Mind

With families spending more time at home, homeowners are looking for ways to add value and comfort to their homes through the addition of an outdoor living space. The homeowners of this home planned to take full advantage…

How to Improve
A Home’s Curb Appeal

Our client, like most of us, had focused their attention for upgrading and home remodeling on its interior. Over a series of several years, their design daydreams had stimulated and provided the impetus for contracting for a new kitchen…

How to Design Build
A Total Home Remodel

It didn’t happen suddenly over a cup of coffee or while reading the newspaper. Over a period of time, our clients had come to the conclusion that their existing home no longer fit their needs. It was time to make a hard decision… How to Design
A Gourmet Kitchen

Our relationship with this client started in 1986 when, with a design build project, we converted a three-bedroom “bachelors pad” into a five-bedroom home to accommodate a newly blended family of five children. Years passed, children moved out… How to Create
An Open Floor Plan

As empty nesters, our clients were confronting the traditional dilemma of most home owners, that being to move or improve. Two of their three children were married and the third was in college. It was time to either find, or create a household…

The footprints of the master bathroom and kitchen were small and could not be enlarged without taking space from the adjoining rooms. The kitchen lacked purposeful storage space and a “workable flow.” The bathroom had…

This outdoor kitchen was designed for year-round pleasure and the changing seasons. With a back drop of beautiful gardens, trees and a large Koi pond, the covered outdoor living space provides a seamless continuation of this… How an Island Became
The Key to a Kitchen Remodel

Our empty-nester clients wanted their kitchen remodel to create a hub for the two to hang out in while simultaneously providing an efficient, highly-organized work space for cooking. They also wanted to restore some… How to Update a 1950’s
Ranch Kitchen & Utility Room How to Remodel
A Kitchen & Master Bath

Our client’s home was surrounded by a hard to replace collection of mature trees. It was located in a quiet neighborhood that was known for its interesting collection of architectural styles. It had a back yard pool that was perfect… How to Remodel
An Outdoor Kitchen

The Buckingham Group had recently completed both a master bathroom and guest bathroom remodel for our client. We were in the design stages of a kitchen remodel, which was to be the second phase of a planned…